Of Owls and Roads 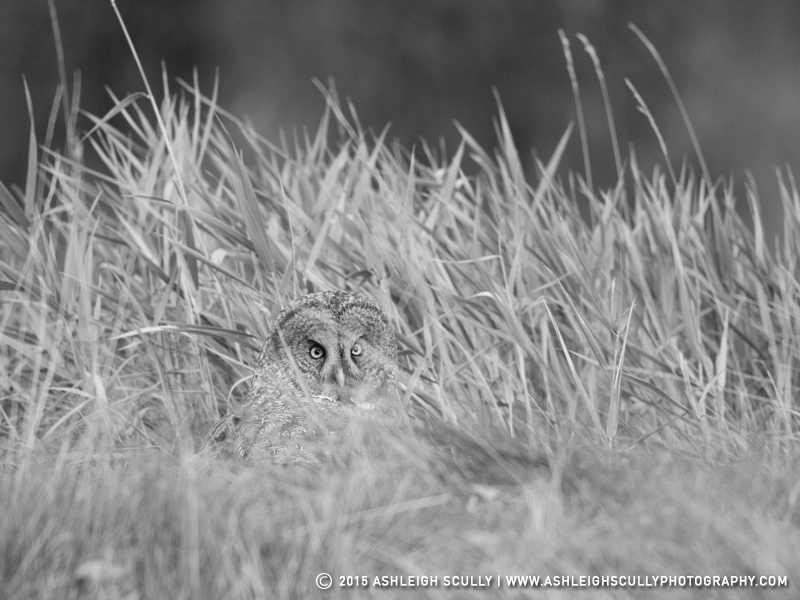 A Great Gray Owl hunts in tall grass alongside a road in Wyoming.

(A Great Gray Owl hunts in tall grass alongside a road in Wyoming)
Last Fall I photographed a pair of Great Gray Owls along a road in Wyoming. It was a magical experience following them around along fence rails and roadsides watching them hunting, sleeping and preening. One was a larger owl (female) and the other smaller (male). I watched how they focused on prey in the grasses completely ignoring the people and photographers around them, and I watched as they flew close to and just over the road to other perches. I didn't think too much about their behavior around the road until I got home a week later and read my email. I found out one of the Great Grays had been hit by a car and was killed the week after I left.
I felt terrible. This beautiful wild animal that I had spent so much time with was now gone. And the worst part was that I couldn't believe it would fly into the path of a car! Why would it do that?
​A month or so after that my Dad found an Eastern Screech Owl (rufous) dead on the road by our house. It had been hit by a car. My Dad remembered seeing it on the road in his headlights at that very spot even last summer. It must have had a favorite roosting spot near the street. After having watched a Screech Owl family fledge from one of my nest boxes last Spring and I photographed them in town, I felt terrible again, just like with the Great Gray. But I still didn't understand why this was happening. So I decided to read about it. Here is what I learned...
There are many reasons why owls get hit by cars. And not just owls. Alot of birds get hit by cars. Birds that eat roadkill, like Crows and Vultures are victims many times. But why owls, which hunt at night and only eat live prey and should be able to notice car headlights? Wouldn't headlights scare them? Apparently not enough, and here's why I think so...
My top 5 reasons why owls get hit by cars:
1. There is lots of prey along roads
2. We drive too fast
3. Owls fly differently
4. Owls don't use the Drive-Thru
5. There isn't enough food

OK so now that we know that what can we do about it?

1. Remember where you see them and show some respect!

2. Help out any way you can

3. Know what to do if it happens to you

Well I hope you learned something. If you have a local Raptor Rehabilitation Center near where you live you should visit it and learn more about this. Also, support them however you can. Most of the owls in these centers are there because of car strikes!

Dan(non-registered)
I have always believed that owls use vehicle headlights to aid in finding prey.After being a semi truck owner for many years, my beliefs are well warranted,many times late at night one will suddenly appear beside the truck then swoop down towards the ditch line and grab something.
Sometimes there timing is bad and they take out a 200.00 mirror.I wish there was someway to avoid this,for the owls and my mirrors
mal(non-registered)
I saw one tonight on the road while I was driving I swerved to miss it and I'm an Owl freak I love them and go owl watching often (I see them almost daily) I pulled over and got out to see if it was alive
It was for sure alive so I moved it out of the road I cried so hard Nd did not know what to do so I called 911 . Its 3:00 am when this happened and I doubt they did anything about it but I called and told them so hopefully someone went to pick it up if not I bet it's still there
If wondering what kind it was a big barred owl it was a 50 MPH road so I assume the person was going really fast.... Nd didn't stop obviously
Doug McSpadden(non-registered)
Hey Ashleigh,

I was checking out your site because I am considering a zenfolio site for my work. I want to compliment you on your work. Your passion for your subjects really shines through, and your attention to photographic technique is outstanding.

I surfed over to this blog and was pleased to see this post. Our country is in desperate need of a stewardship ethic in regards to both our wild lands and our wildlife. This ethic is more than just conserving and preserving, it is about an awareness and taking care of what we have around us. It is heartening for me to see someone your age who really "gets it".

I also wanted to give you a book suggestion. The chapter, "Hearing" in Bird Sense, by Tim Birkhead is outstanding, particularly in regards to Great Grey Owls and their swooping behavior and its relationship with targeting prey and triangulation.

I look forward to seeing more work in the future, and congratulations on your outstanding current work.
Valerie Holdsworth Luckey(non-registered)
Ashleigh - Your essay is very insightful! You are on your way to becoming not only a noteworthy photographer but your keen observation skills will open many doors. It is obvious you keep a journal! Best of Luck. (Henry's wife)
Melissa Groo(non-registered)
Ashleigh, what a thoughtful, intelligent post!! You have thought of reasons that didn't even occur to me! Wonderful job. So proud to know you!
No comments posted.
Loading...
Subscribe
RSS
Recent Posts
2017: A Year to Remember My Ten Best of 2016 Red Fox Mousing Series, Lamar Valley, Yellowstone National Park My Ten Best of 2015 A Day in the Field with Teton Cougar Project In Search of the Barred Owl My Photography Mentors, Friends and Heroes Of Owls and Roads
Keywords
Ashleigh Scully Photography In Search of the Barred Owl owls and roads
Archive
January February March April May June July August September October November December
© Ashleigh Scully Photography
Powered by ZENFOLIO User Agreement
Cancel
Continue