This is a sequence that I took this past winter (February, 2016) of a female red fox mousing in the Lamar Valley of Yellowstone National Park. It was a cold and overcast morning and it was the third day of my trip. We hadn't seen a fox until we climbed a hill and looked up ahead of us in the road. This vixen was hunting right next to the road. We drove up near her and waited. She left and walked out into an open field. I watched her and waited until she started listening closely to the ground in front of her. This is what happened next:

1. She tilted her head a few times trying to pinpoint her prey. A red fox has incredible hearing. 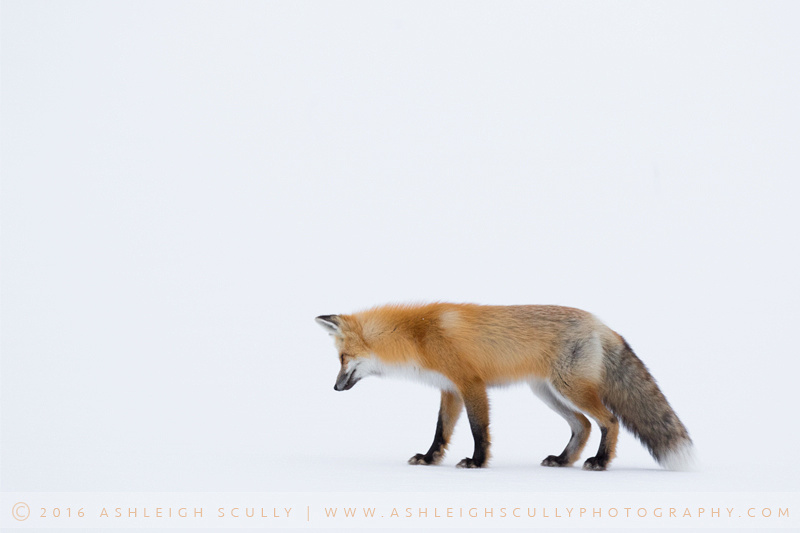 2. Once she knew something was there, she focused on the exact spot and got ready to jump. 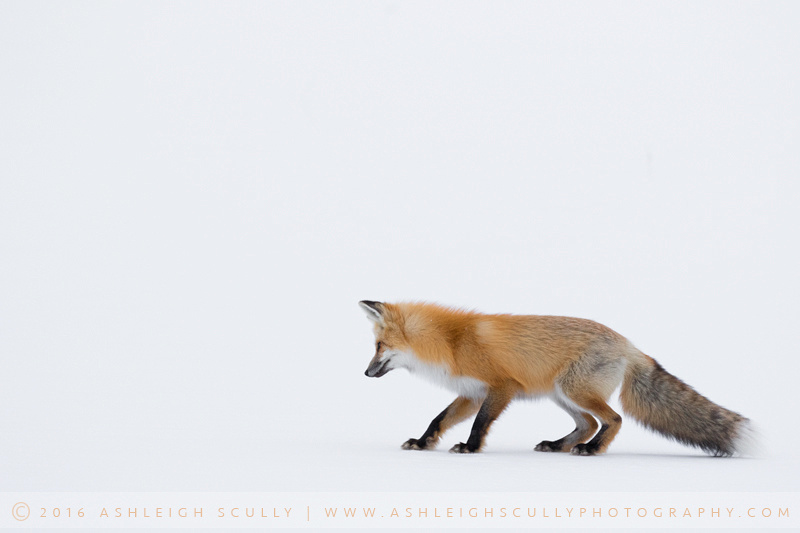 3. She was now ready to spring. I was braced on a beanbag in a car window and I moved the lens up a bit here from the last shot. I don't remember doing it but I was now worried that I didn't have enough room at the top of the frame if she jumped. 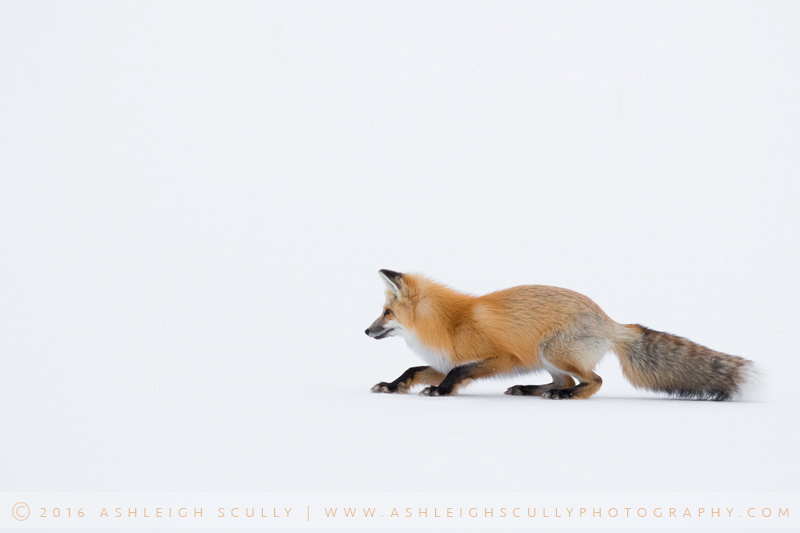 4. She uses her forelegs to push up and then her back legs give her the spring. She is still looking at her target.

5. I don't know if I ever would have had enough shutter speed in this low light to freeze this frame perfectly. It shows how focused she still is on where the prey is. 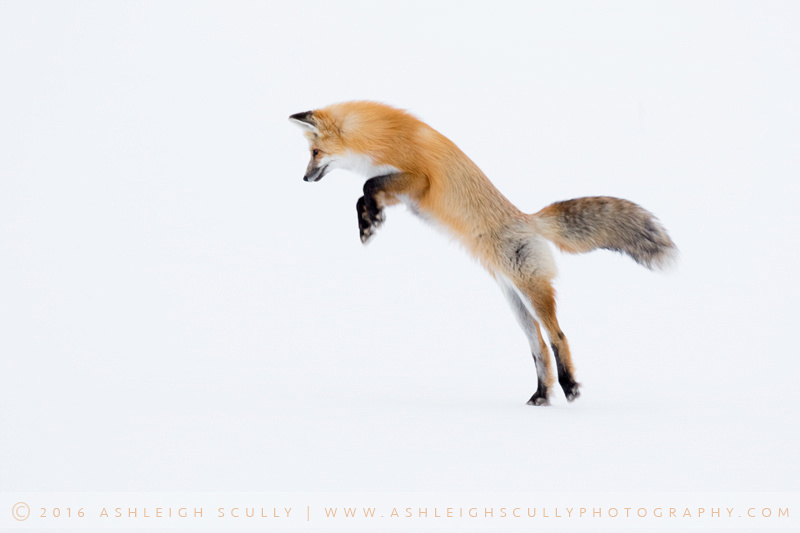 6. There is a subtle shadow of where she used to be. She's on her way to the top of the leap, still looking at where she should land. 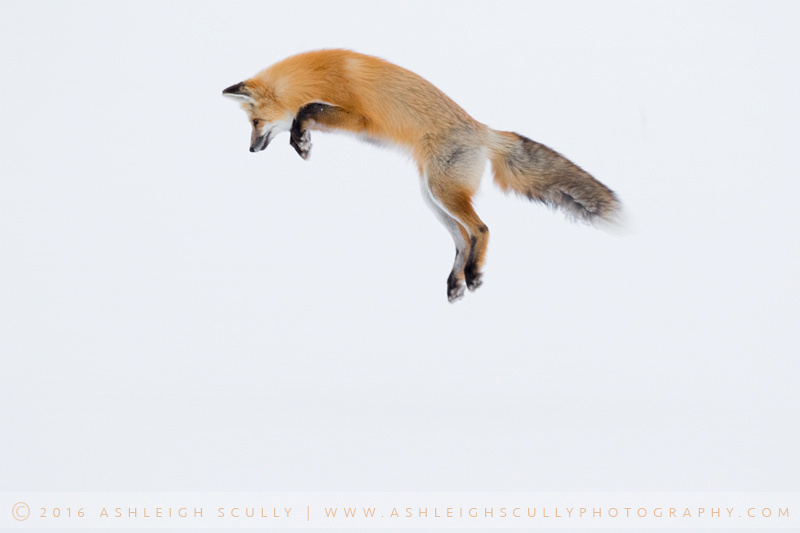 7. This is the highest point of the leap. I love the shape of her body and how determined she is. 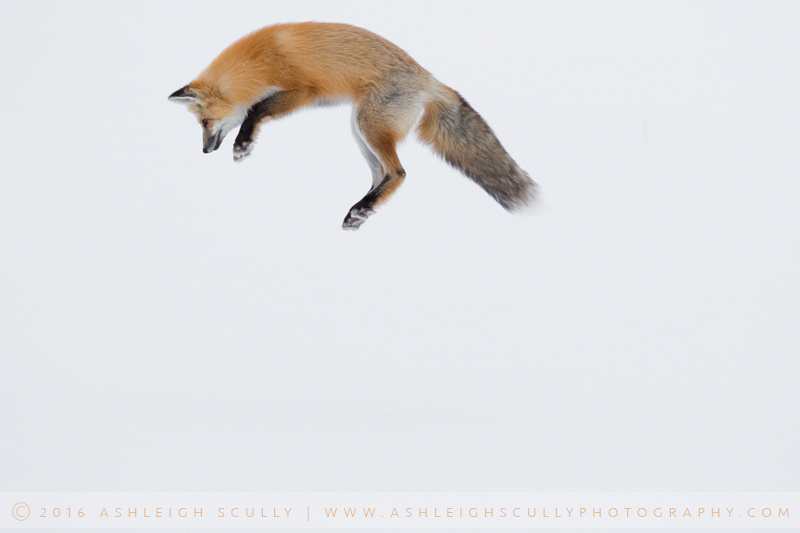 8. She is on her way down now and is tucking her back legs in a bit. 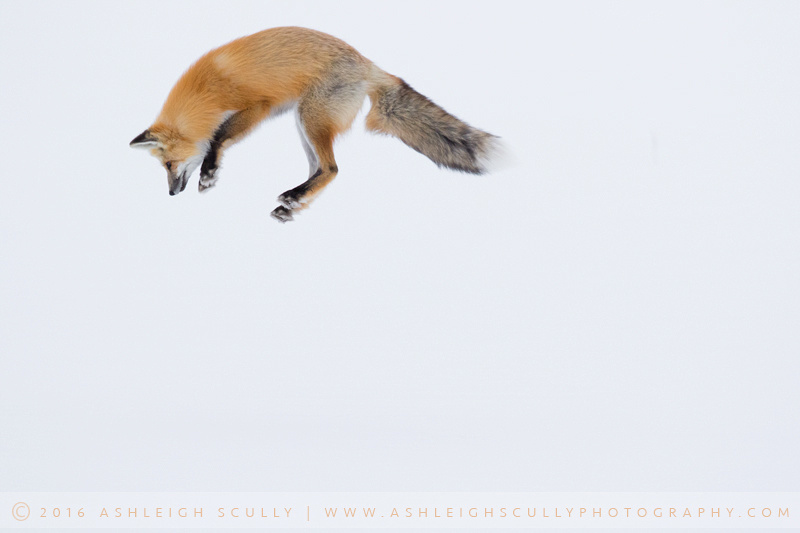 9. Here she is becoming more streamlined and the forelegs are folding up tightly under her chin. There is no turning back now! 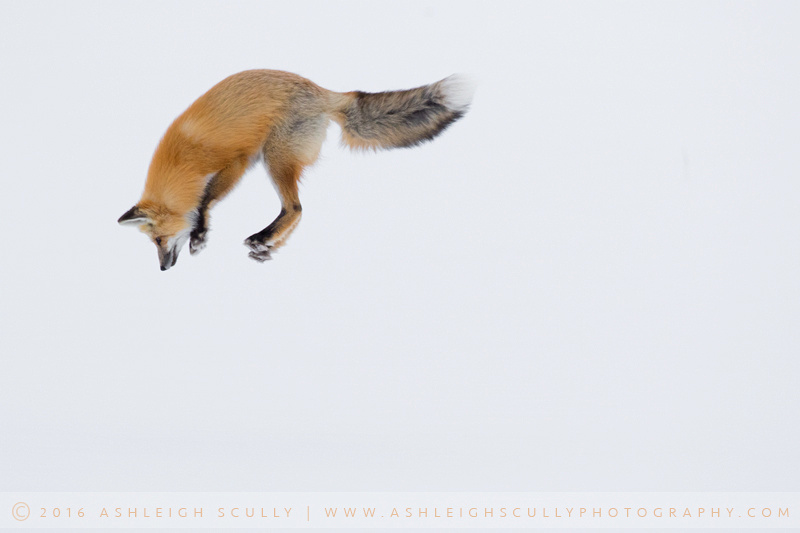 10. This is one of my favorites from the sequence. She is like an arrow, focused and straight dropping out of the sky to pin a vole under the snow below. 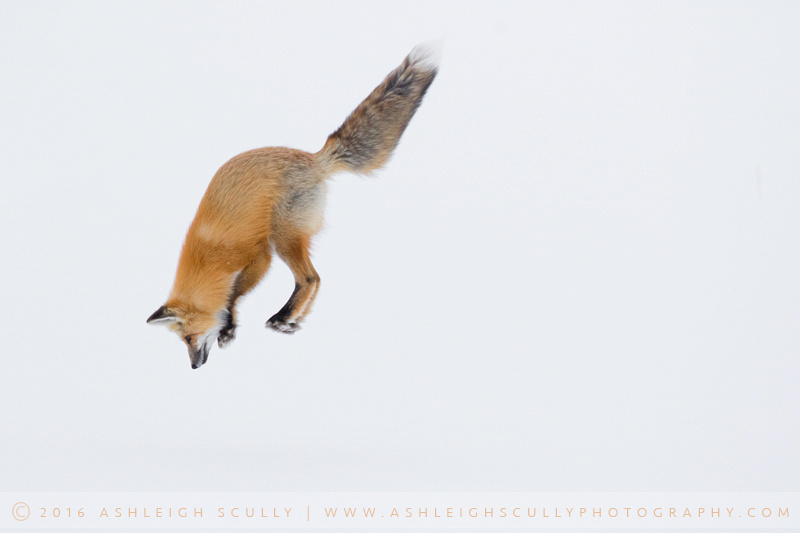 11. OK. Ouch. This has to hurt a little bit, especially if there's crust on the snow surface. I think the nose breaks the snow first and then the front paws follow to widen the hole. 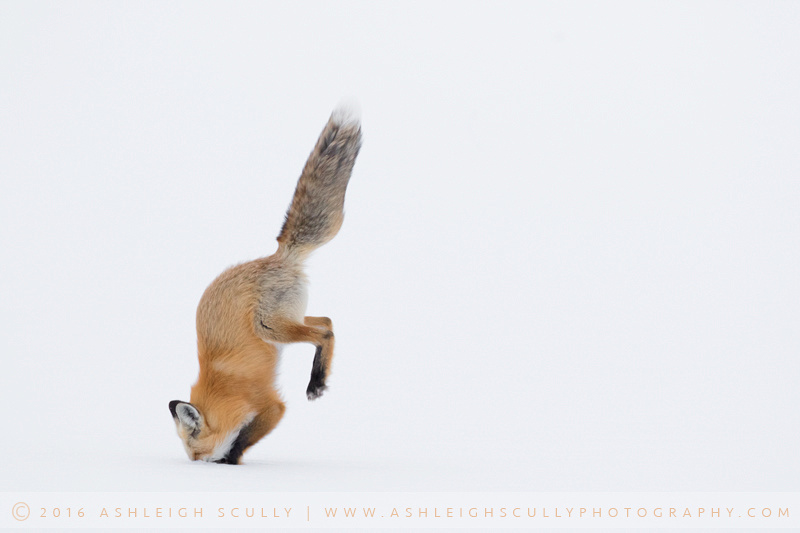 12. There is a lot of fox under the snow now. Who knows what is going on under there?? 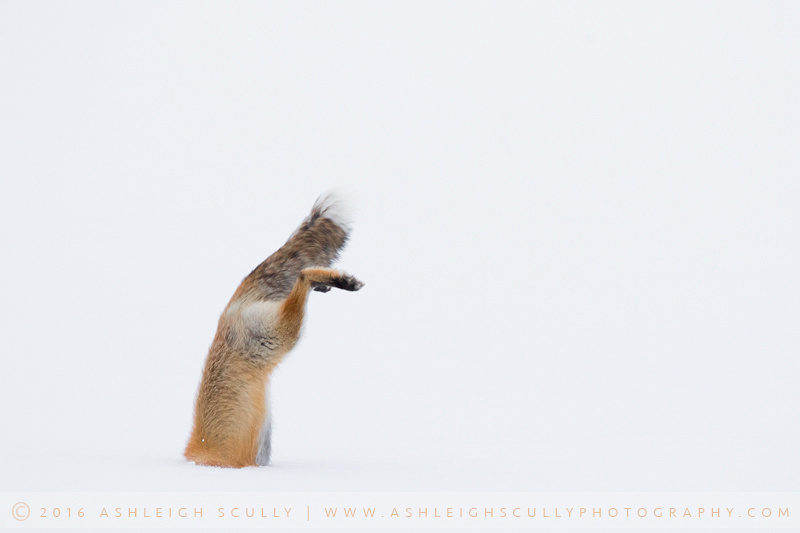 13. This is the straightest she extended herself on the landing. She held herself like this for a few seconds. I think she was feeling around for the vole or maybe scratching deeper with her paws. 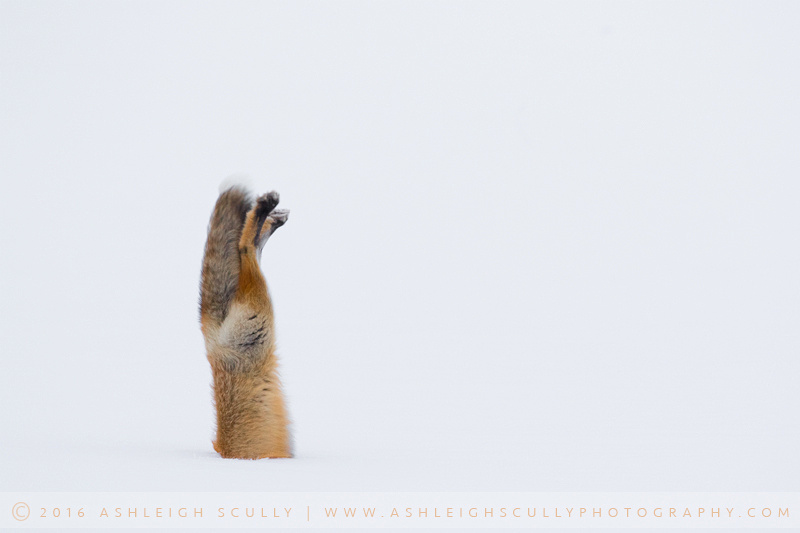 14. After the landing, my buffer was about full, so I reset my AF point and recomposed for what she would do next. This is my favorite of the series. Im pretty sure she stayed down there for almost 15 seconds. That's a long time. 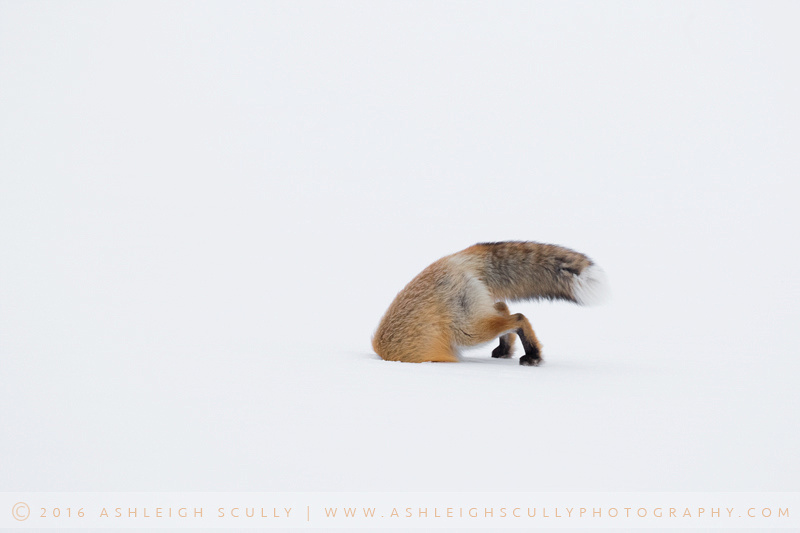 15. Here she is starting to push herself backwards out of the hole. I was curious to see if she caught her prey! 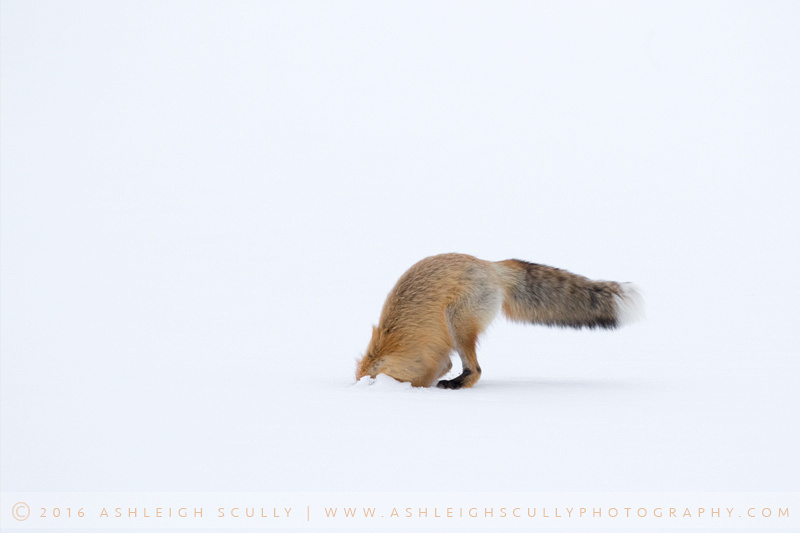 16. I still can't tell if there's a vole in her mouth. I was impressed that she was able to back out of that hole with just her forelegs. She shook off some snow from her face... 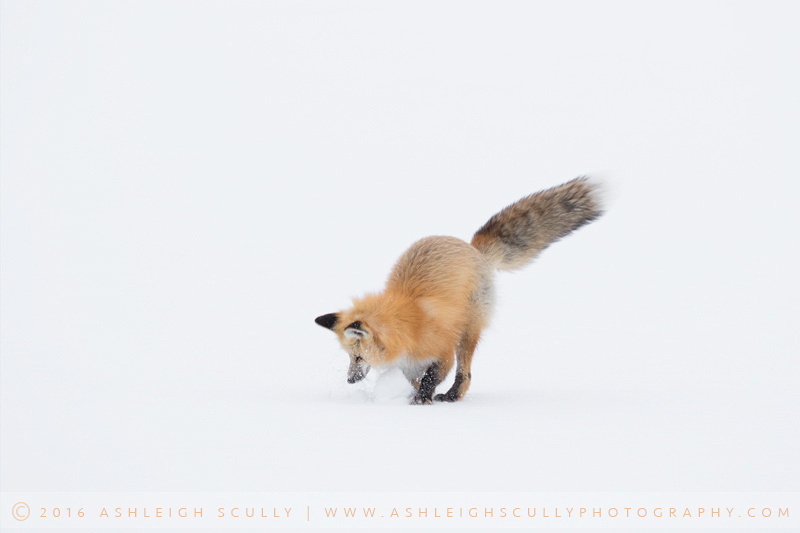 17. and I can now tell that she missed her target. At least she doesn't look too disappointed... 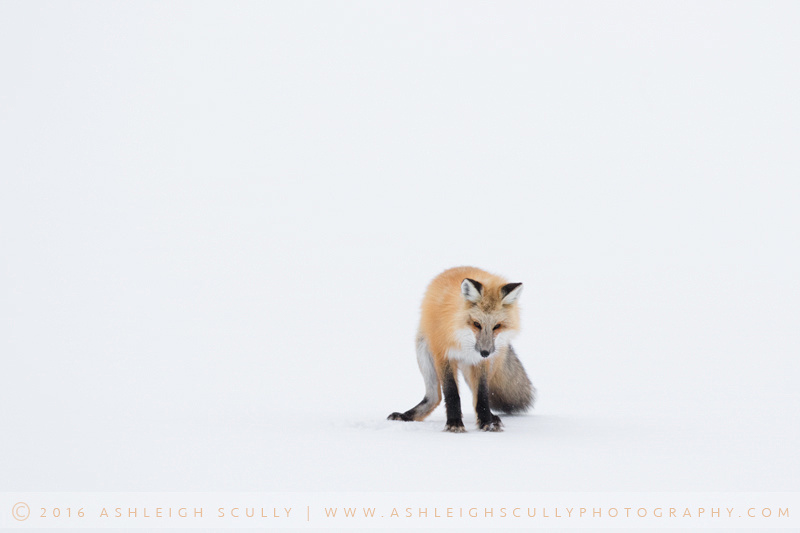 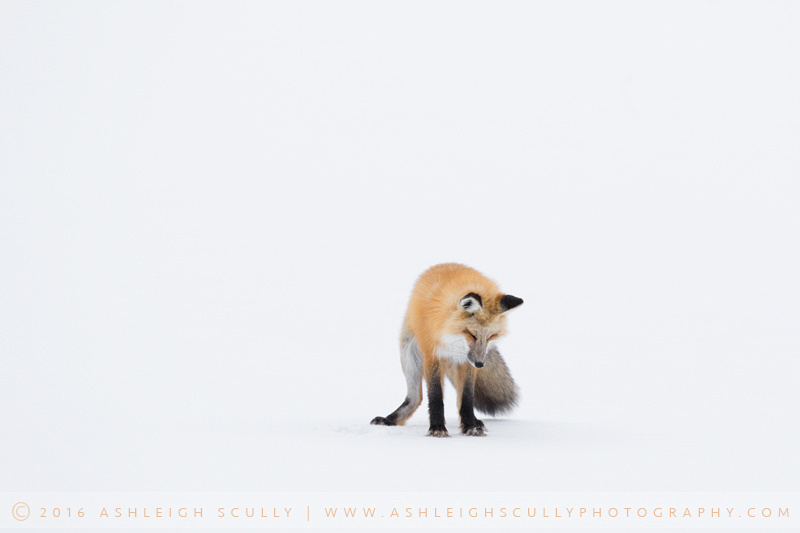 19. This is the last shot that I took of her, as she trotted off to find another meal. She looks more determined in this photo. I never saw her again.

Linda Stronza(non-registered)
This is a phenomenal series of photos! You have an incredible eye for anyone, but especially, for someone of your years. Don't be deterred from your talent (and I hope) your passion. You have a true GIFT!
Rita(non-registered)
Thank you so much for sharing. Great moment in time!
Diane DeVilbiss(non-registered)
This is wonderful! Beautifully done! Your comments make it even more special. You actually just made my day a whole lot better, Ashleigh. Thank you!
Beth Bridges(non-registered)
That was amazing, Ashleigh! Thank you so much for capturing this so beautifully and narrating the scene.
margie yntema(non-registered)
Stunning images accompanying a great explanation to each image, thanks for sharing
No comments posted.
Loading...
Subscribe
RSS
Recent Posts
2022 Update 2017: A Year to Remember My Ten Best of 2016 Red Fox Mousing Series, Lamar Valley, Yellowstone National Park My Ten Best of 2015 A Day in the Field with Teton Cougar Project In Search of the Barred Owl My Photography Mentors, Friends and Heroes Of Owls and Roads
Keywords
Ashleigh Scully Photography In Search of the Barred Owl owls and roads
Archive
January February March April May June July August September October November December
© Ashleigh Scully Photography
Powered by ZENFOLIO User Agreement
Cancel
Continue